On Wednesday 14th September, some of of year 6 pupils went to Rib Valley Waters to fish for the day! 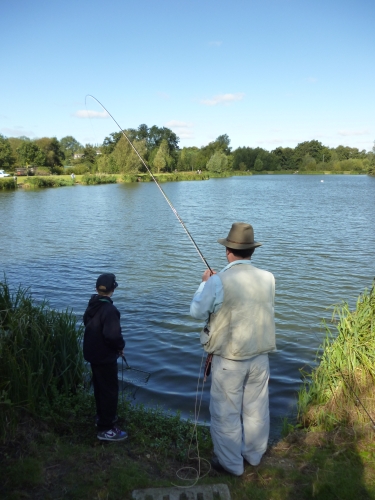 the picturesque Rib Valley immediately adjacent to the River Rib at Ware in Hertfordshire.

The children spent the day Trout and Coarse fishing. In the morning the children were teamed up with a professional angler from the Masons and were taught how to fly and coarse fish.

Fly fishing is an angling method in which an artificial 'fly' is used to catch fish. The fly is cast using a fly rod, reel, and specialised weighted line. Casting a nearly weightless fly or 'lure' requires casting techniques significantly different from other forms of casting. Fly fishermen use hand tied flies that resemble natural invertebrates or other food organisms, or 'lures' to provoke the fish to strike.

The children had an enjoyable day and all of them caught some fish. All of them had a go at the two types of fishing, fly fishing the children were allowed to keep the fish for supper but the fish caught coarse fishing were put back into the river.