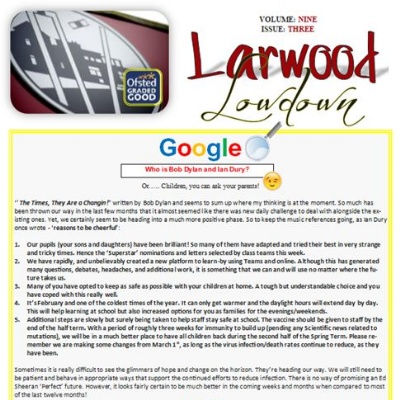 Google
Who is Bob Dylan and ian Dury?

‘’ The Times, They Are a Changin!" written by Bob Dylan and seems to sum up where my thinking is at the moment. So much has been thrown our way in the last few months that it almost seemed like there was new daily challenge to deal with alongside the existing ones. Yet, we certainly seem to be heading into a much more positive phase. So to keep the music references going, as Ian Dury once wrote - ‘reasons to be cheerful’:

Sometimes it is really difficult to see the glimmers of hope and change on the horizon. They’re heading our way. We will still need to be patient and behave in appropriate ways that support the continued efforts to reduce infection. There is no way of promising an Ed Sheeran ‘Perfect’ future. However, it looks fairly certain to be much better in the coming weeks and months when compared to most of the last twelve months!

PLEASE NOTE:
that as per all communications up until now, we return on:
Monday 22nd February at the same time (10.00AM) and with the same pupils.
We will notify you of any changes ready for the week starting Monday 1st March.

Thank you for your continued support!